We continue to be committed to the health and safety of our audience and artists. Therefore, we will be following all guidelines put forth by the health department and the CDC. At this time we recommend the wearing of masks for all events inside the Meeting House. This may change from program to program so please check back. Thank you for your cooperation! 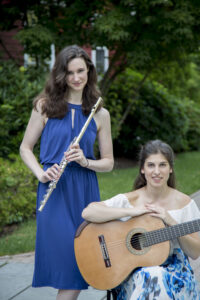 A Celebration of Dance Music with Tedesco Duo

Dance has offered people a means of expression throughout history and across cultures. It has the power to connect communities and has evolved as cultures meet and exchange ideas. Join Tedesco Duo in exploring music from a variety of dance forms, ranging from the French courts to the brothels of Buenos Aires.

Tedesco Duo is a lively flute and guitar duo from New England comprised of Arielle Burke on flute and Catherine O’Kelly on guitar. They perform repertoire from all eras, with an emphasis on contemporary music. Arielle and Catherine began performing together in 2011 as students at The Hartt School. Their first performance was of Sonatina for Flute and Guitar by Mario Castelnuovo-Tedesco, which is what prompted them to name the ensemble “Tedesco Duo.” They have since performed the works of composers such as Mauro Giuliani, Astor Piazzolla, Phillip Houghton, Libby Larsen, Roberto Sierra, and Máximo Diego Pujol. Tedesco Duo has been praised for their communicative playing and for performing repertoire that is colorful and spirited. Admission: $15.00   Sponsored by Golden Girl Granola 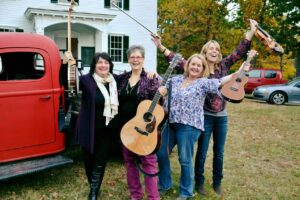 The Kelly Girls – Music on the Porch Series

The Kelly Girls have quickly gained recognition as one of the most entertaining Celtic Bands in New England. Rousing renditions of songs and tunes rooted in the Celtic traditions of Ireland, Scotland, Canada and America along with captivating harmonies and instrumentation lend to their signature sound.

The Band has played many prestigious venues and festivals, and continues to garner media attention for both their traditional and original music. For The Kelly Girls, Celtic music is about storytelling, complete with varying degrees of instrumentation and lyrics. “We respect the historical compositions that we carry forward, we recognize that we are also part of a new generation of storytellers. We feel connected to our common humanity, and the thread of hope and dreams that weave us together, continue to connect us to each other.”

Great American Songbook Foundation describes the Great American Songbook as “the canon of the most important and influential American popular songs and jazz standards from the early 20th century that have stood the test of time in their life and legacy. Often referred to as American Standards,  the songs published during the Golden Age of this genre include those popular and enduring tunes from the 1920s to the 1960s that were created for Broadway theatre, musical theatre, and Hollywood musical film.” Join us as we share not only the songs, but the stories behind the songs. Admission: $15.00